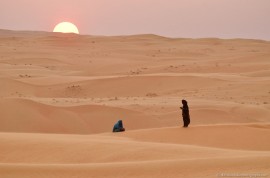 Humans have tried to control the weather since immemorial times. Leaders who claim to control the weather commanded respect and power from their subjects. We analyze the case of pro-pluvia rogations in the Catholic Church in Murcia (Spain) over the last 400 years. Pro-pluvia rogations were ceremonies performed to ask God for rain. First, we assess the homogeneity of the series. Non-parametric tests show that the series are very homogeneous until 1833, the end of the old regime in Spain. During the last two centuries the series lack homogeneity due to political and social turmoil in Spain, but are useful to understand social phenomena. Second, we show the temporal distribution of rogations. Most prayers took place between October and April, and very rarely during the Summer.

Rogations were performed every day of the week, with a mode on Sundays. High level rogations were concentrated on Sundays and Thursdays, coinciding with the major Catholic liturgies. Finally, we show how the rogations that were asked (and paid) by the civil authorities dier from the ones paid by the ecclesiastical authorities. The rogation cycles were usually initiated by the civil authorities and then mechanically repeated until it rained. Ecclesiastical authorities rarely initiated the rogation cycle and they usually wait a few months to began initiating their prayers.