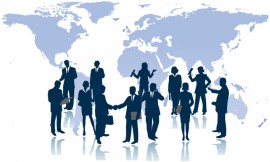 We uncover new dynamic patterns related to importers age and the macroeconomic environment that static models cannot explain. Our patterns are related to import switching, i.e., the simultaneous adding and dropping of intermediates at the firm level. Three facts stand out. First, switching is pervasive as 65% of firms do it and, at the firm level, switching is not small at 35% of firms import value. Second, young firms switch higher shares of their imports. Third, when import prices are high, switching shares fall. Accordingly, in our model, firms dynamically search for suppliers and face an import choice with heterogeneously productive intermediates. When firms search, they find new suppliers and compare the newfound productivity draws to those by their current suppliers and keep the best productivity intermediates. Through this process, over time, firms improve their productivity, and grow. In the final section of the paper, we show that several key predictions of the model hold using within-firm variation regressions. First, least productive intermediates are more likely to be dropped. Second, over time firms increase the number of foreign intermediates they use and reduce their switching. Third, switching causes future sales growth and by a quantitatively large amount. We view our paper as complementary to those that emphasize capital accumulation and worker reallocation to be important for firm dynamics and aggregate productivity