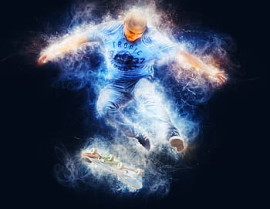 We take the axiomatic approach to uncover the structure of the revenue-sharing problem from broadcasting sports leagues. Our starting point is to explore the implications of three basic axioms: additivity, order preservation and weak upper bound. We show that the combination of these axioms characterizes a large family of rules, which is made of compromises between the uniform rule and concede-and-divide, such as the one represented by the equal-split rule. The members of the family are fully ranked according to the Lorenz dominance criterion, and the structure of the family guarantees the existence of a majority voting equilibrium. Strengthening some of the previous axioms, or adding new ones, we provide additional characterizations within the family. Weakening some of those axioms, we also characterize several families encompassing the original one.