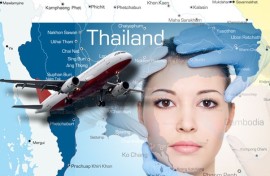 This paper models the inbound tourism demand of Thailand by focusing on six major tourism markets, including China, Malaysia, South Korea, Japan, Russia, and India. Several economics variables widely used in the demand modeling literature were adopted. Besides, additional variables pertaining to environmental and security aspect were considered and incorporated into our investigated model. The panel data of six countries during 2003 and 2015 were collected from various sources. In our analysis, the random effects model was appropriated with the data set. The coefficient estimates were computed using panel least square method. Our results revealed that the substitute price of tourism destinations as well as the number of crime cases statistically significant in explaining the variation in tourism demand for Thailand. The major tourism markets of Thailand are sensitive the price of tourism and more likely to choose destination with lower costs of stay. Meanwhile, security and safety is another factor that influences their decision-making in selecting visiting destination.