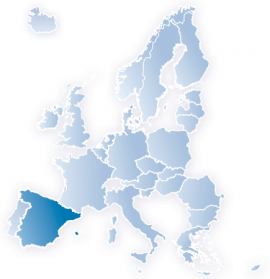 We consider quarterly data of the Spanish economy from 1987 to 2013 to establish causal interconnections in a model free manner, using symbolic dynamics and permutation entropy (PE) and establish the exogeneity of adoption of the Euro (in Jan 1999) as the governing mechanism that leads to the key causal impacts on (1) interest rates, (2) housing, (3) government deficits, and (4) labor costs. We also find that the rigidities of the labor market continue to dominate the future evolution of the Spanish economy. PE generates a directed graph with cyclic and acyclic components which are then analyzed further. We also compare the PE results with a conventional VAR model of the same data with Granger causality; we show that PE leads to a far richer set of results that have policy lessons.