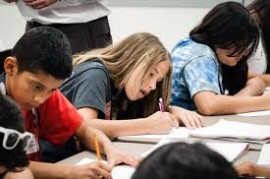 The existence of a ‘multiplier’, ‘compositional’ or ‘social context effect’ is debated extensively in the literature on school effectiveness. Some researchers have posited that the relationship between social context and achievement is mediated by school, teacher or classroom factors, such as teacher expectations, quality of instruction, or adequacy of school resources. In this context, this paper examines the extent to which there is evidence of a social context effect using PISA data for Ireland. Despite controlling for a rich set of school and individual background related variables, we find that, on average, there is a significant positive relationship between school socioeconomic status and student achievement in reading and mathematics. From a distributional perspective, results show a differential effect of school socioeconomic status, particularly in reading, with a stronger effect at the lower end of the achievement distribution. Further heterogeneous analysis using interaction terms shows that students from disadvantaged backgrounds have lower levels of achievement in more disadvantaged schools, relative to their disadvantaged peers in more advantaged schools with this association stronger with respect to reading.