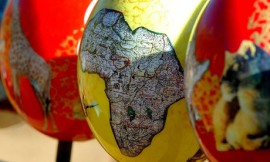 How has wellbeing evolved over time and across regions? How does the West compare to the Rest? What explains their differences? These questions are addressed using an historical index of human development. A sustained improvement in wellbeing has taken place since 1870. The absolute gap between OECD and the Rest widened over time, but an incomplete catching up –largely explained by education- has occurred since 1913 but fading away after 1970, when the Rest fell behind the OECD in terms of longevity. As the health transition was achieved in the Rest, the contribution of life expectancy to human development improvement declined. Meanwhile, in the OECD, as longevity increased, healthy years expanded. A large variance in human development is noticeable in the Rest since 1970, with East Asia, Latin America and North Africa catching up to the OECD, while Central and Eastern Europe and Sub-Saharan Africa falling behind.