Seminario 18/05: David Jiménez Gómez (U. Alicante)- Evolution of Self-Control in the Brain 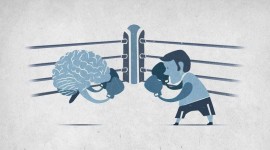 ABSTRACT.
Temptation and self-control evolved as single mechanism to make humans behave against their own self-interest. I follow a recent literature in Economics on the evolution of preferences, by modeling the evolution of self-control in a principal-agent framework. The principal can obtain the first best asymptotically by biasing the utility of the agent (from which an endogenous conflict emerges) and simultaneously endowing the agent with a limited amount of self-control.
Several empirical properties of self-control, observed in psychological experiments, are explained in terms of the model: 1) self-control grows over time as it is exercised; 2) self-control is lower when the level of glucose in the blood is low; 3) self-control is not a physical resource; 4) as the environment becomes more tempting, individuals exhibit less self-control. The model sheds light on the difference between self-control and hyperbolic discounting and provides a framework for understanding the recent surge of chronic non-communicable diseases, suggesting that the current environment could be welfare-reducing.
Publicado el Publicado el 13/02/2018
Por Gestor MétodosHaz un comentario
FacebookshareTwittertweetGoogle+share