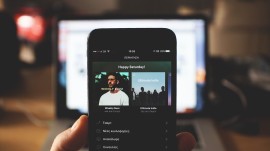 Abstract: Digitization has vastly increased the amount of new music produced and, because of streaming, has raised the number of songs available directly to consumers. While enhanced availability has levelled the playing field between already-prominent and new artists, creators may now be highly dependent on platform decisions about which songs and artist to promote. With Spotify emerging as dominant major interactive music streaming platform, this paper explores the effect of Spotify’s playlists inclusion decisions on both the promotion of songs and the discovery of music by new artists. We employ four empirical strategies for measuring the impact of playlists on song success. First, we examine songs’ streaming volumes before and after their addition to, and removal from, major global playlists. Second, we compare streaming volumes for songs just on, and just off, algorithmic top 50 playlists. Third, we make use of cross-country differences in inclusion on New Music Friday lists, using song fixed effects, to explain differences in streaming. Fourth, we develop an instrumental variables approach to explaining cross-country New Music Friday rank differentials based on home bias. We find large and significant effects: being added to Today’s Top Hits, a list with 18.5 million followers during the sample period, raises streams by almost 20 million and is worth between $116,000 and $163,000. Inclusion on New Music Friday lists substantially raises the probability of song success, including for new artists.