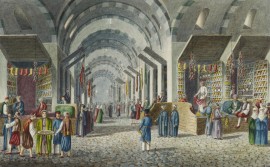 What are the implications of legal rules for growth and business expansion? This question has been at the center of the rich literature that explores the link between legal institutions and economic performance. While the scholarship has provided insights on the differential experience of countries which developed their own legal systems and those that transplanted law from abroad, the Middle East remains unexplored. This study examines the evolution of corporate law in the late Ottoman Empire and early Turkish Republic, drawing implications for the broader debate on the impact of transplanting legal rules. We use statutes of Ottoman and Turkish company law and construct a novel dataset of firms by enterprise forms to explore how legal rules changed over time in this region. We show that the adoption of legal rules depended on the underlying political economy and other complementary institutions. There were important differences between the transplant (Turkey) and the origin countries (France and Germany) in terms of business organization. We also show that the political economy framework within which the law evolved contained discriminatory practices (i.e., certain extraordinary taxes) that undermined non-Muslim firms more vis-a-vis Muslim firms, and thus finalising the nationalization of the economy.