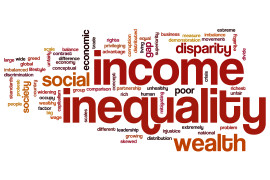 This paper revisits the link between income inequality and social conflict. In spite of its plausibility such link is not finding any clear, strong empirical backing. We explore a particular variation around the basic rent-seeking model of conflict with the goal of obtaining predictions more aligned with evidence [see Esteban and Ray 2008, 2011 for another variation]. The first variation consists of studying the effect of income inequality in two different scenarios: when the payoff of conflict depends on inequality itself and when the value of the winner’s prize is independent of the income of the players. In the first case, we would be in a redistribution conflict, while the second case is an idealization of an ethnically-driven conflict. We obtain that in the case of class  confrontation, if there is sufficient inequality, a further increase in inequality will deter the poorer group away from conflict and induce the richer group to uniformly increase their best reply. When the payoff from victory does not depend on the income of the players, the effect of increased inequality is different. The group that has seen its income fall becomes more combatant and the one with an income increase becomes less combatant. The model can explain the complex relationship between economic inequality and class conflict.