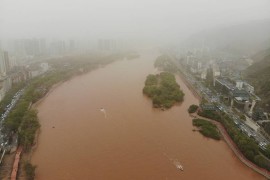 This paper formulates and analyzes a dynamic game between two trading regions that face a transboundary pollution problem. We study how the distribution of firms and trade costs affect the optimal emission decision of governments and how the resulting environmental policy would alter the allocation of the industry between both countries. The underlying microeconomic behaviour of consumers and firms is framed within the Economic Geography literature, in particular within the Footlose Capital Model. The macroeconomic model that arises is a transboundary pollution linear-quadratic dynamic game. For the case of fully symmetric regions, we find that higher transport costs lead to higher industrial production and higher stock of pollution at the steady state. However, while domestic consumption increases, exports could shrink depending on how the representative consumer weighs the homogeneous goods and the pollution damage in his welfare. For the case of regions that differ in their shares of industrial activity, we find some preliminary results.  Governments modify their production with respect to changes in the pollution stock in a similar way to the symmetric case, although the optimal emissions are different in both cases. In a second stage we observe that the production decisions of the governments can generate core-periphery structures, even in the initially symmetric region case, which is new in this type of linear models.