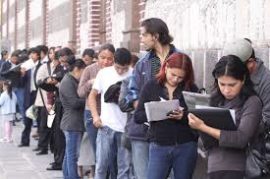 We assess the unequal effects of the Great Recession on the labor market outcomes of different cohorts of young individuals and education groups in Spain. We provide empirical evidence that young workers in Spain suffer from a high unemployment rate because of a low job-finding rate and a high separation rate. We also document that the evolution of labor market hazards after the Great Recession has hurt the employment prospects of young individuals.  We assess the long-run effects of these changes by developing a search theoretic model of cyclical fluctuations of the labor market, with participation decisions and human capital accumulation. We explicitly model the Spanish labor market duality by introducing two type of jobs which differ on the finding and separation rates.  We use the model to quantify the scarring effect of recessions for workers from different cohorts and educational level. We show that the interaction between human capital accumulation and the dual labor market plays a role in determining the long-lasting effects of recession, particularly for young workers.