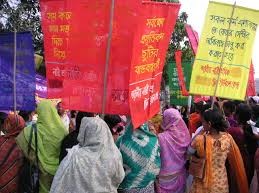 Gender-based violence has become a serious issue to such an extent that it has been catalogued as a high-impact health problem by the World Health Organization. However, there is a lack of spatio-temporal analyses to reveal a complete picture of the geographical and temporal patterns of crimes against women. In this paper, we focus on analysing how the geographical pattern of “dowry deaths” changes over time in the districts of Uttar Pradesh during the period 2001-2014. The study of the geographical distribution of dowry death incidence and its evolution over time aims to identify specific regions that exhibit high risks and hypothesize on potential risk factors. We also look into different spatial priors and their effects on final risk estimates. Various priors for the hyperparameters are also reviewed. Risk estimates seem to be robust in terms of the spatial prior and hyperprior choices and final results highlight several districts with extreme risks of dowry death incidence. Statistically significant associations are also found between dowry deaths, sex ratio, and some forms of overall crime.