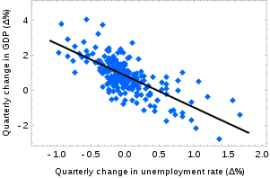 We estimate Okun’s relationship for four European countries (France, Germany, the Netherlands and Spain) with a nonparametric procedure, without imposing a previous specific functional form. We apply the non parametric MARS  methodology that endogenously detects multiple thresholds and therefore is able to identify multiple possible regimes. In addition, we control for the Euro area crisis to capture possible effects of the economic activity of neighbour countries on domestic unemployment rate variations. Our results confirm the existence of two regimes in each country but significantly different thresholds across countries. The form of Okun’s relationship for Germany, France and the Netherlands are similar and quite different from Spain where it is much steeper. Differences between Okun coefficients below and above the threshold are consistent with the “firm’s risk aversion hypothesis”, but different thresholds across countries may be related to the “labour hoarding hypothesis”. The negative value of the threshold in Spain may reflect the “institutional rigidity hypothesis”. Finally, the fact that the Euro area crisis may affect the domestic Okun’s law is consistent with  decision makers with risk aversion who use information from the economic area they are operating in. These results not only potentially enrich Okun’s law estimations but also opens the debate over how the different theoretical hypothesis intervene and shape Okun’s law for each country.