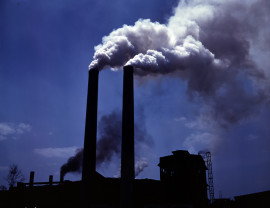 Abstract: This paper studies the impact of adaptation on the stability of an international emission agreement. To address this issue we solve a three-stage coalition formation game where in the first stage countries decide whether or not to sign the agreement. Then, in the second stage, signatories (playing together) and non-signatories (playing individually) select their levels of emissions. Finally, in the third stage, each country decides on its level of adaptation noncooperatively. We solve this game assuming that damages are linear with respect to emissions which guarantees that emissions are strategic complements in the second stage. Our analysis shows that the adaptation-mitigation game has a maximum of two equilibria: an agreement consisting of three countries as occurs in the mitigation game and the grand coalition. The agreement with three countries is always stable, however the grand coalition is stable only if the adaptation costs are low or the marginal benefit of emissions is high or these two things occur. Moreover, we find that when the gains from full cooperation are high enough what comes along with high adaptation costs, the only stable agreement is the one formed by three countries. Thus, the paper suggests that complementarity does not promote necessarily the participation in an IEA.